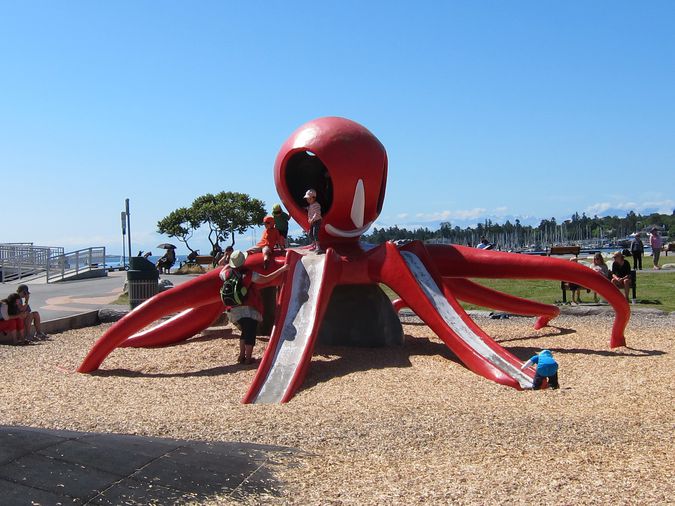 I had cycled to Victoria a couple of times last year and I absolutely loved it. Things had finally settled down in terms of weather, family and garden so it was time to make good on a plan to get over again and visit some friends at the same time.

On the morning of Monday, July 10, I set out from home. I cycled most of the way to the ferry but opted to take the skytrain from Patterson Station to Scott Road Station to get across the Fraser River. Last year I tried cycling all the way via the Alex Fraser Bridge. It was a nice enough route but the walking/cycling path on the bridge is pretty narrow and it feels precarious. I prefer the safety of the skytrain but would like to try a different way next time.

Once on to the causeway to the ferry, I noticed a strange sight. There was a truck with boat trailer in the water. The truck was deeper than seemed healthy and the hood was up. Oops! As I was running early, I turned around to take a picture. Just then a couple of guys from BC Ferries came up to do the same thing. They said that the truck was there overnight and the tide brought the water level all the way to the roof.

On the other side, I tried a scenic route once I got down to the Elk Lake area. I scooted over to the trails on the opposite side of the lake.

On the south end of Elk and Beaver Lakes, I took the pipeline trail through to the Royal Oak area. This trail was exactly as I remembered it from childhood, complete with sections of old, riveted pipeline.

Once through Royal Oak, I ended up in an area that I had cycled through several times when I was in elementary school. It was now mostly unfamiliar. There were new parks and new buildings and I was approaching the neighbourhood from a different angle. I got a bit lost but I ended up on the Colquitz Creek Trail which ultimately ran into Interurban Road and the Galloping Goose Trail which are now more familiar territory.

Once on the Galloping Goose, it was late in the afternoon and there were a lot of cyclists on the trail. Even the bike trails have a rush hour in Victoria but at least you get to keep moving. I arrived at Paul's Motor Inn, in time for a shower before going out to dinner with my freediving friend, Rick.

The objective for Tuesday was to visit Jeff, a former coworker who has moved back to the island and is about to build a house in the Cordova Bay area. My plan was to take the scenic route along the waterfront. I gave myself lots of time to stop for photos along the way. This is a great way to see Victoria.

I started out just after 9am and ran straight into the most touristy part of Victoria, the inner harbour. The harbour was almost devoid of tourists; a perfect time to be there! In fact, both vehicle and bicycle traffic was very light on my whole seaside route.

I made a stop at Ogden Point and then other stops at Clover Point, Gonzales Beach, Willows Beach and Cadboro Bay. I had a bit of a nostalga moment at Cadboro Bay because some of my earliest memories are of playing on the concrete octopus, cadborosaurus and salmon. Those things are still there and in very good condition. It is good to see they are still being enjoyed by kids after all this time.

I was now running a bit late but decided to go for a quick side trip to Ten Mile Point, which is a very good dive site on a slack tide. Then I had to hurry to get up to Gordon Head to visit Jeff.

After my visit with Jeff, I made my way back to the Lochside Trail and headed back up to the ferry. I could either take my time and make the 6 pm boat or hurry and catch the 5. I put the boots to it and barely made the 5 pm boat, getting on after all of the trucks had loaded.

From the Tsawwassen ferry terminal, I opted to take the bus to Bridgeport Station and then the skytrain up to Broadway and Cambie. I made the final leg on the bike.

Here is a map of my route, retrieved from my GPS:

I am becoming more and more a fan of travelling on week days. It is a great way to avoid crowds, even in peak tourist season.

I also don't think I could get tired of cycling in Victoria. The Lochside and Galloping Goose trails in particular are real treats. I could miss the ride to and from the ferry on the Vancouver side but not from Victoria.