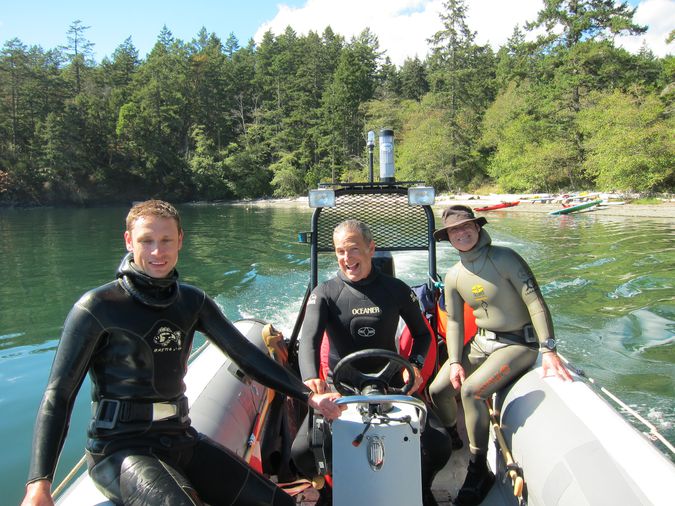 Back in August, my freediving friends Rick and Jaap hatched a plan: to take Rick's Zodiac from Swartz Bay to Portland Island, camp on the island and go out diving on the nearby GB Church during the day. Then they invited me and a few others to join them for a weekend in early September.

Camping isn't really my favorite activity but the overall weekend sounded like a lot of fun. We ended up with four of us making the trip: Rick, Jaap, Olli and myself.

In the spirit of making this trip relatively inexpensive, the three of us on the Vancouver side arranged to park Olli's truck at the Tsawwassen ferry terminal and then walk on to the boat with all of our camping equipment, freediving equipment and a substantial amount of food. We would then walk off and then cart everything to the nearby government wharf to meet up with Rick and his boat. Rick, bless his soul, would bring the heavy, bulky stuff, including all of the water and cooking supplies as well as most of the food.

Friday - The Trip to Portland Island

The walk to and from the boat was as physically challenging as one would imagine. We had a lot of gear to lug and the ferry terminals are quite large. Fortunately, Olli had a nice wheeled dolly so that we could strap on some of the gear bags. Fortunately, that dolly navigated the ramps better than I had expected and once on the ferry, we could just leave it all with our seats and go off for food.

On the way there we had a good look at Portland Island and got to see Rick pulling in to the next bay over as our ferry swung round into the dock. Perfect timing!

It took us a while to find our way out of the ferry terminal and onto the road to the government wharf. By that time, Rick had come up the road to meet us. Rick's zodiac is pretty big but it was pretty full by the time we loaded all of our stuff on board.

It didn't seem to take us very long at all to get to Portland Island. The weather conditions were perfect so we didn't have to worry about bouncing our gear off the boat. We landed in a protected little bay on the South shore of the island. The campground was just up some steps from the beach. It was an open grass field with six well-spaced picnic benches. We would be the only ones to camp there that weekend.

We didn't have the island to ourselves though. There was a family of raccoons feasting in the abandoned apple orchard next to us.

After unloading gear, Rick parked the boat at the dock a few hundred metres away and we quickly set up the tents and had the first of two of Jaap's chili dinners before it got dark.

We got up early. It had been a long, cold night for me. This was only my second time camping after a 20 year gap. I was on a borrowed sleeping pad and my sleeping bag is only suitable for couch surfing. Fortunately, things warmed up quite nicely once the sun came up and Rick's scrambled eggs and Jaap's aeropress coffee helped the morning considerably.

My ambitious dive buddies decided to do a shore dive after breakfast, followed by a dive on the GB Church after lunch. Then we'd have dinner and have no other choice than to have an early night due to the dark, the cold and the fatigue.

For our morning shore dive we swam out to the far side of the island that protected our bay. The visibility wasn't great but it was definitely better than it had been in recent weeks due to a massive plankton bloom that had blanketed much of the BC coast. There was a kelp forest out there and lots of kelp crabs hanging out in the fronds. There seemed to be endless hiding spots for octopus but I didn't see any. We kept the dive short because we wanted to save our energy for the GB Church.

For the afternoon dive, we suited up on shore and loaded on to Rick's zodiac like a bunch of commandos. The boat ride took us all of five minutes.

The GB Church is a small coastal freighter that was originally used as a munitions ship in WWII. This was the first project of the Artificial Reef Society of BC and was sunk in 1991. I first dove it on scuba a few months after it went down. There is only one float that marks the Church right now and that is at the forward mast.

Jaap and I were first in to tie on our own float so that we would have a more direct line to the wreck. On my very first dive, I saw a huge cabezon sitting on the top of the mast. I came up very carefully to tell Jaap to go down to take a photo or some video but by the time he went down it had fled. I think I may have seen the same fish down on the hull in a later dive but it was down in a walkway and too deep and late in the dive to set up a photo. It's too bad because it was enormous.

The forward mast and the whole bow area are lovely; completely covered by plumose anemones and other life. However, the stern makes for better freediving because so much more of it is in shallower water. Unfortunately there is a long section of the boat that is in deep water between bow and stern. It took us a few dives just to find the stern and by then both Olli and Rick were running out of steam. Jaap and I moved the float to just above the bridge and had a few dives on the superstructure before packing it in for the day.

It was another cold, uncomfortable night for me. I got up before the others and went down to the beach to take the morning sun. At one end of the beach I found several holes in the gravel. I figured that this must be where the raccoons had been digging for clams. Just then I saw the mother raccoon climbing around the point with the kids in tow. So cute. When they made it to the gravelly part of the beach, the mother waded in to feel around for things to eat. Nearby, a juvenile caught a crab and dragged it to shore before ripping its claws off and eating the body. Between the apple orchard and the clam beach, the local raccoons had it pretty good.

The dive plan for Sunday was to save our energy for one early afternoon dive on the GB Church. We wanted to dive with slack water but we also needed to leave the island as soon as we could to have everyone off the water before dusk.

We had remembered our landmarks from the day before and we were able to locate the stern section after just a few dives and tie our float to it. I left the camera on the float for most of the dives so that I could better experience the wreck. Sometimes I feel like I miss the dive if I am looking at it all through the camera lens. On one such camera-free dive, I cruised over the bridge, past the funnel and then dropped directly off the stern and down to the sea floor at 28m. I also had a few dives down to the entrance to the bridge. In that one spot you can see a covered walkway with anemones and rockfish, the bridge itself and the entrance to the engine room at the base of the funnel.

Jaap took the following video of me looking into the bridge and engine room of the GB Church:

The current was just picking up when we decided to call it quits. It was then time to head back, peel off wetsuits, load everything into the boat and head home.

Our late afternoon boat ride back to Swartz Bay was blissful. We arrived in good time to catch the 5pm boat. After we unloaded and bade our goodbyes to Rick, the hard part started again. We were on the opposite side of the ferry terminal from the walk-on part with a busy highway between it and us. We instead rolled our dolly into the bicycle entrance and strolled into the beginning of the vehicle lineup. We had some strange looks from the ticket agent but were able to acquire boarding passes. Overall though, things were easier coming back because we were more familiar with the routine and we were better at strapping our gear to the dolly.

Huge thanks to Rick, Jaap and Olli for a great weekend, especially Rick for providing the boat transportation that made the whole plan possible.